FACT: parenting is hard. Take the summer holidays for example, 6 weeks of being a constant source of entertainment for the little ones – it’s tiring, especially when paired with work and all of the other things life throws at us.

It’s times like this when the calling call from the big (or little!) screen is at its most tempting. Tablets and TVs have, we say cautiously, lent some parents a helping hand as a digital babysitter – and they will continue to do so.

With that being said, should we, parents, limit screen use? Or can screen time actually be beneficial to a child’s development? This article is here to try and shed some light on the matter.

OFCOM’s recent report on ‘Children and Parents: Media Use and Attitudes’, revealed that some children under 5 spend over 4 hours in front of a screen each day – with 3-4 year olds spending a daily average of 71 minutes online.

With such a large number of children spending an increasing amount of time in front of screens, there is a concern that prolonged exposure may negatively impact a child’s physical and emotional wellbeing:

It’s at this point we would turn to some government guidelines for some assistance – well, no can do. Despite countless studies, opinion pieces and open letters on the matter, official guidelines do not exist, nor has acknowledgement been made.

This has caused some leading authors, educationalists, and child-development experts (40 in total) to pen a letter imploring for a set of guidelines to be commissioned – in their view, disparity warrants advice. You can read the letter here.

The American Academy of Paedriatics has issued guidelines, recommending that children:

So, at first glance, it appears excessive screen time could be harmful to a child’s emotional and physical wellbeing.

But, once we sieve through the ‘digital heroin’ rhetoric that seems to swamp this topic, it’s clear that there is far more to the debate than first meets the eye.

Lack of UK guidelines: too much hype, not enough evidence?

We referred to a letter penned by 40 signatories calling for the introduction of official screen time guidelines. On the face of it, their stance appears to be both reasonable and justified; supported by academic research.

But, soon after its release, a group of leading scientists criticised the letter as a thing of hype.

The scientists, each with expertise and experience in screen time, argue that the lack of official guidelines is simply down to one thing: insufficient evidence.

“… any simplistic approach to issues facing childhood health and wellbeing is inappropriate, and a focus on screen time is not evidence-based.”

Reports & studies on the benefits of screen time

Another important factor to consider in the screen time debate is the term ‘screen time’ itself. It is consistently used as a blanket expression covering TVs, computers and well, anything with a screen.

However, is it now unfair to do so?

With the increasing prevalence of tablets, ‘screens’ are no longer just a passive medium: they can encompass user interaction. Kids are now able to play on apps that require thought and creativity in order to proceed to further levels. They encounter ‘lean back’ media in the form of TV and ‘lean forward’ platforms such as the internet and touchscreen devices.

With this in mind, ‘screen time’ can clearly be construed to mean very different things: it could be sitting in front of a screen watching mind-numbing TV shows for an hour, or it could refer to employing thought, logic and reasoning via an educational app.

All in all, it seems two things are key in the screen time debate: content and context. 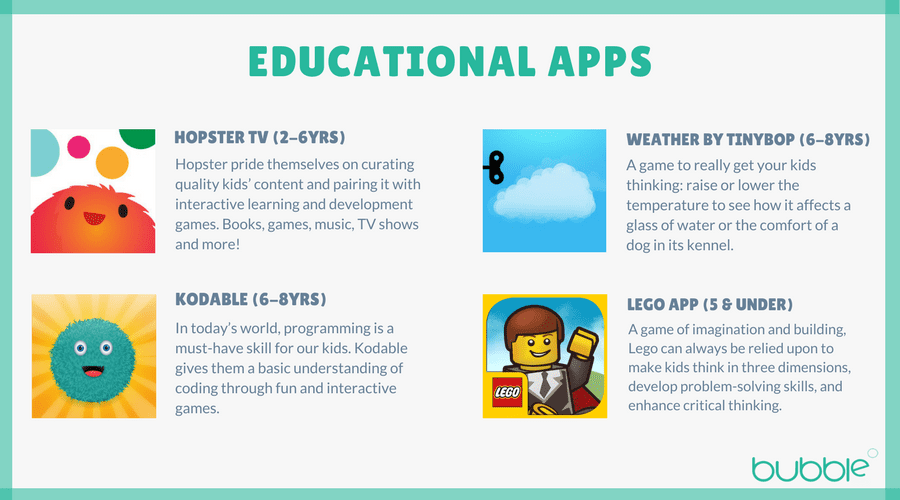 What comes out of a screen can vary significantly.

Is it a fighting game? Or one that develops problem-solving skills? Are kids watching clips of gifts being unwrapped? Or a TV programme that gets them thinking? And if content can differ so significantly, surely so too can its effects?

Apps are now challenging the notion that screen time is, and always will be, inherently harmful. How are they doing this? By combining immersive technology with stimulating, educational content.

Screens can enhance relationships, just as much as they can foster isolation. Skyping a family member can enrich a child’s life; trawling through social media comments may do the very opposite.

Children react to different things in different ways: every child is unique. What one may find entertaining, another may find boring. One may be totally unaffected by something that affects another.

How can we quantify good vs bad screen time? Context has a big part to play, for it may have a much greater impact than sheer quantity alone.

Tips for parents: getting the most out of screen time

Set an evening aside each week for family night. Here’s some ideas of what to do:

Apps exist that help parents limit the amount of screen time their kids are getting:

UnGlue: Set time limits for different apps, games and channels. You can also set times of the day when kids can go on and indulge. Kids can monitor their own usage and the app works across all devices.

Screen Time: Similar to UnGlue. Parents can set limits and monitor screen usage. The app also allows parents to create check lists and give rewards in the form of additional screen time.

Become part of their online and gaming world. Play their favourite game and discover the web with them. Understand their online profile or better yet, help them build it!

So, how much screen time should children be allowed?

It depends on you.

There is no right or wrong answer: some parents may prohibit screen time in order to avoid adverse effects, others may impose no restrictions whatsoever: you know your child better than anyone.

“Usually parents say that none of these things are affected so if that is the case, there is little to worry about when it comes to screen time.”

Tips for parents: getting the most out of screen time:

If you have any questions about any of the above, or want something added to the article, email us at [email protected] and we’ll be in touch!

Jump to the top of the page